In the fictional Star Wars universe, the Solo family was once a prestigious, Corellian royal family. The first known Solo in the family tree is Berethon e Solo, a king who ruled Corellia during the Golden Age of the Old Republic and set up constitutional monarchy in 312 BBY. His descendants continued to rule Corellia until the establishment of the Diktat centuries later. By 29 BBY, their declining status had considerably drove them out of rule and into poverty. Han Solo, unfortunately for him, was born during that time.

During the post-Imperial era, however, the Solo family regained its prestige—starting with the marriage of Han Solo and Leia Organa (born Leia Skywalker) around 8 ABY. Not only did the connection to the Skywalker family give his line a boost, but the heroic and legendary actions and accomplishments of his family (as well his Skywalker relatives), including his children, made the Solo-Skywalker family, overall, one of the most famous and powerful ones in history.

Leia and Han had three children: Jacen, Jaina, and Anakin. Jacen turned to the dark side and became Darth Caedus. Before that, he and Tenel Ka, Hapan Queen Mother and fellow Jedi Knight, had a daughter, whom they named Allana.

Presumed to be a descendant of Ben Skywalker, Cade Skywalker was the last remaining Skywalker; whether this included its Solo offshoots is unknown. 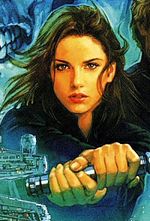 Jaina Solo is a fictional character from the Star Wars Expanded Universe, the eldest child of Han Solo and Leia Organa Solo. She is also the elder twin of Jacen by five minutes and the sister of Anakin. She has appeared in various novels and the Champions of the Force set for the Star Wars Miniatures Game.[1]

The characters of Jaina Solo and her twin brother Jacen were created by Timothy Zahn for the novel The Last Command (1994). The twins played a small role in Kevin J. Anderson's Jedi Academy trilogy, and a larger supporting role in Vonda McIntyre's The Crystal Star. Not until the Young Jedi Knights (1995) do Jaina Solo and her friends become major characters.[2]

Jaina, named after Han's mother, is born five minutes before her brother Jacen in The Thrawn Trilogy. The twins, and eventually their younger brother, live at various safe havens for their first few years under the protection of Leia's handmaiden Winter. In Champions of the Force, Jaina helps her brother defend their unconscious uncle from the spirit of Sith Lord Exar Kun. In The Crystal Star, Jaina is kidnapped by and used, along with her siblings, in a plot to take advantage of their Force powers. In the Corellian Trilogy, Jaina is again kidnapped but escapes. In the Young Jedi Knights series, Jaina travels to Yavin 4 with her brother to begin her Jedi training.

Throughout the New Jedi Order series, Jaina pursues a life separate from her twin brother and becomes Mara Jade Skywalker's apprentice. Jaina progresses quickly as a Jedi and a pilot, eventually joining Rogue Squadron. She also develops a romantic relationship with Jagged Fel. She briefly becomes the apprentice of fallen Jedi Kyp Durron. Jaina's understanding and manipulation of Yuuzhan Vong technology causes them to associate her with their trickster goddess. She is present at the conclusion of the war with the Yuuzhan Vong.

In The Joiner King, Jaina and the Jedi Zekk are joined in the Killik hive. Jacen tricks them into attacking a Chiss base to provoke a war between the Chiss and the Killiks; Jaina, furious, vows that she will never fly with Jacen again.

In the Legacy of the Force series, Jacen throws Jaina out of the Alliance Navy when she refuses to follow his order to destroy a crippled ship. She senses at this time a growing darkness in her twin. In Betrayal, Jacen falls to the dark side of the Force, and Jaina realizes her duty as the "Sword of the Jedi" requires her to stop him. She turns to Boba Fett to train her. In Invincible, Jaina duels and kills Jacen.

Anakin Solo (originally Han Solo Jr.) is a fictional character from the Star Wars Expanded Universe, the youngest child born to Han Solo and Leia Organa Solo, and the brother to elder twin siblings, Jaina and Jacen. Anakin is named for his maternal grandfather, Anakin Skywalker, and, like his namesake, is a talented pilot who is prodigiously gifted both in the Force and mechanical engineering. He dies in the novel Star by Star.

Anakin Solo debuts in Tom Veitch's Dark Empire II limited comic series. He is first referred to as Han Solo, Jr. by his father, but Leia corrects him. Leia names Anakin after her biological father, Anakin Skywalker, as a reminder of hope; however, Anakin still fears the name and his grandfather's legacy.[5] Anakin appears as an infant and toddler in many Star Wars novels such as the Jedi Academy Trilogy. Anakin and his siblings, Jacen Solo and Jaina Solo, play central roles in other novels such as The Crystal Star, The New Rebellion, and The Corellian Trilogy.

On October 1, 1995, Nancy Richardson started the Junior Jedi Knights series with The Golden Globe starring Anakin and his best friend Tahiri Veila. Anakin was now an eleven year-old child starting his training at the Jedi Academy on Yavin IV.[5] Richardson continued Anakin's adventures in the following two novels, Lyric's World and Promises, before Rebecca Moesta finished the series with Anakin's Quest, Vader's Fortress, and Kenobi's Blade, starting in 1996. Anakin appears in the Young Jedi Knights series by Kevin J. Anderson and Rebecca Moesta, which follows the adventures of Anakin's siblings, Jacen and Jaina.

In 1999, the first novel of the New Jedi Order series was published, entitled Vector Prime by R.A. Salvatore. Anakin is now a teenager studying as a Jedi under his uncle, Luke Skywalker, debating with his brother, Jacen, on the ways of a Jedi and the Force. In the novel's climax, his father's copilot and best friend, Chewbacca, dies saving Anakin's life.

In the following novel by Troy Denning, Star by Star published on October 30, 2001, Anakin leads a team of Jedi to take out a dangerous enemy of the Jedi resulting in his death. Writers of the New Jedi Order story line revealed in a question-and-answer section of the paperback edition of The Unifying Force published on August 3, 2004 that Anakin was supposed to be the hero of the story and lead the Jedi Order, but this was changed due to the release of the Star Wars prequel films, in which the hero was also named Anakin. Instead, he dies in battle at the conclusion of the novel.

Even after his death, Anakin Solo has been mentioned several times in most following novels, including a possible appearance in Traitor by Matthew Stover, as a droid in Betrayal by Aaron Allston as Anakin Sal-Solo, and in "Backlash, where he appeared to his maternal uncle Luke Skywalker and to Luke's son, Ben Skywalker" by Aaron Allston.

Anakin is portrayed in the earlier books as being a genius and a loner, but is haunted by his name. In Lyric's World, it is revealed that he loves to take computers apart and put them back together and sees it as a puzzle.[6] He would also have dreams of Emperor Palpatine and Darth Vader trying to persuade him to fall to the dark side of the Force; Anakin overcomes this fear in Anakin's Quest, in which he confronts himself.[7]

In The New Jedi Order series, Anakin is older but not portrayed too differently. He still spent time alone thinking about the role of the Force, and would get into arguments with his brother, Jacen Solo, on the subject.[8] However, his uncle Luke still sees Anakin as too young and reckless.[9]

The Solo family tree, according to Expanded Universe, is as follows: