Melbourne's Luna Park is a historic amusement park located on the foreshore of Port Phillip Bay in St Kilda, Victoria, an inner suburb of Melbourne, Australia. It opened on 13 December 1912 and has been operating almost continuously ever since.

This was the first of the four Luna Parks that were built in Australia, of which only Melbourne and Luna Park Sydney are still operating. The other two, now defunct, Luna Parks were at Glenelg in South Australia (1930–1934) and at Redcliffe in Queensland (1944–1966).

The St Kilda park was developed by American showman J D Williams,[1] in company with the three Phillips brothers (reputedly from Seattle), who had all had experience in the amusement and cinema industry in the US. Their Chief Engineer and main designer was Englishman T H Eslick, who, according to the opening day brochure, had worked on numerous parks around the world. Williams returned to the US in 1913 to help found First National Films which subsequently became Warner Brothers. The Phillips brothers stayed on and ran the park until their deaths in the 1950s.

In the years before WWI the park was a great success, with attractions such as the Scenic Railway, Palais de Folies (later Giggle Palace), River Caves of the World, Penny Arcade, a Whitney Bros 'while-u-wait' photo booth, the American Bowl Slide, as well as live performances in the Palace of Illusions and on a permanent high-wire.

Closed for WWI, it did not re-open until an extensive overhaul in 1923 added new and improved attractions, such as the Big Dipper roller coaster, a Water Chute, a Noah's Ark, and a beautiful 4-row Carousel made in 1913 by the Philadelphia Toboggan Company.

Between the wars, a number of new attractions were made, including Dodgem cars in 1926-7 and in 1934 a Ghost Train. In the 1950s the park was refurbished, including the addition of The Rotor in 1951. The park remained popular throughout the 1950s, 1960s and into the late 1970s, when finally some of the earlier attractions began to be replaced by modern mechanical rides.

A fire in 1981 destroyed the Giggle Palace, and in the same year the River Caves were declared unsafe, and demolished.[2] In 1989 the Big Dipper was demolished in anticipation of a new large roller coaster which never eventuated.

The main historic features of the park to remain include the iconic "Mr Moon" face entry and flanking towers (1912, restored 1999), the Scenic Railway (1912) which is the oldest continuously-operating roller coaster in the world, and the carousel (1913 restored 2000). Other historic attractions include the Ghost Train (1934), and the fairytale castle-style Dodgem's Building constructed to house the newly patented ride in 1927 (the ride itself was relocated from the first floor of this building to the ground level in the late 1990s).

The park also includes many modern attractions such as the Metropolis roller-coaster, the Spider, a Ferris wheel, and other mechanical thrill-rides. The park remains popular with children and their parents who have fond memories of the park from their youth.

A consortium headed by Melbourne transport magnate Lindsay Fox bought Luna Park in early 2005, pledging to restore it to the glory he remembers from his 1940s youth, spent in nearby Windsor. Since the multi-million dollar purchase, there has been no major overhaul, but the Scenic Railway Station was given a facelift, popular temporary attractions such as the Lara Croft Tomb Raider experience have been presented, and a major section of the Scenic railway itself underwent major repairs between December 2007 and June 2008.

The park's triangular beachfront site is on government land, bounded by the O'Donnell Gardens on one side and Cavell Street on the other. Across this street is a larger triangle of foreshore crown land known as the 'Triangle Site', occupied by the grand 1920s Palais Theatre, the 1970s Palace nightclub (burned down in 2007), and carparking. The City of Port Phillip in consultation with the Victorian State Government ran a tender process in 2007 to restore the Palais Theatre and redevelop the remainder of the site. Lindsay Fox was part of a consortium that submitted a proposal which was unsuccessful.

Luna Park as a whole is listed by the National Trust of Australia, and the main heritage features are listed on the Victorian Heritage Register. 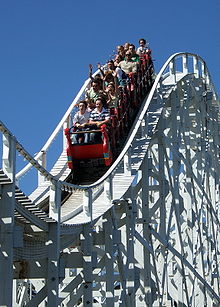