The Supreme Federal Court (Portuguese: Supremo Tribunal Federal or STF) is the supreme court (court of last resort) of Brazil, serving primarily as the Constitutional Court of the country. It is the highest court of law in Brazil for constitutional issues and its rulings cannot be appealed. On questions involving exclusively lower legislation, the highest court is, by rule, the Superior Court of Justice.

Alongside its appeal competence, mostly by the Extraordinary Appeal (Recurso Extraordinário), the Court has a small range of cases of original jurisdiction, including the power of judicial review, judging the constitutionality of laws passed by the National Congress, through a Direct Action of Unconstitutionality (Ação Direta de Inconstitucionalidade, or ADIn).

The judges of the court are called Ministers (Ministro), although having no similarity with the government body of ministers. They are appointed by the President and approved by the Senate. There is a mandatory retirement age of 70.

All judicial and administrative meetings of the Supreme Court have been broadcast live on television since 2002. The Court is open for the public to watch the meetings.

In May 2009 The Economist called the Supreme Federal Court "the most overburdened court in the world, thanks to a plethora of rights and privileges entrenched in the country's 1988 constitution (...) till recently the tribunal's decisions did not bind lower courts. The result was a court that is overstretched to the point of mutiny. The Supreme Court received 100,781 cases last year."[1]

The court was inaugurated during the colonial era in 1808, the year that the royal family of Portugal (the House of Braganza) arrived in Rio de Janeiro. It was originally called the House of Appeals of Brazil (Casa de Suplicação do Brasil).

The proclamation of the Brazilian Declaration of Independence and the adoption of the Imperial Constitution in 1824 preceded the establishment of the Supreme Court of Justice (Supremo Tribunal de Justiça) in 1829. With the first Constitution of the Republic, the current Court was established.

Although the constitutional norms that regulated the creation of the Court allowed Deodoro da Fonseca, Brazil's first president, to nominate an entirely new Court, the president chose to nominate as the first members of the Supreme Federal Court the ministers who were then serving as members of the predecessor imperial Court.

Two hundred members have served on the Court. The Constitution of 1891 decided that the Court would have 15 members. When Getúlio Vargas came into power, the number of members was reduced to 11. The number was changed to 16 in 1965, but returned to 11 in 1969 and has not changed since. Of all Presidents of Brazil, only one (Café Filho) never nominated a minister. 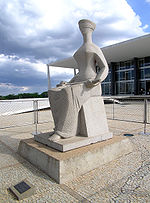 The Justice, by Alfredo Ceschiatti in the front of the Supreme Federal Court

The President and Vice-president of the Court are elected by their peers for a term of two years by secret ballot. Re-election for a consecutive term is not allowed. By tradition, the members of the Court always elect as president the most senior minister of the Court that has not yet served as President, to avoid politicization of the Court.

If all members currently sitting on the Court have already served as president, the rotation starts all over again; however, due to the existence of a compulsory retirement age, and the consequent appointment of new ministers to fill those vacancies, it is very rare for the cycle to be completed and re-started, and some ministers are forced to retire before their turn in the presidency arrives.

According to the same convention, the Court selects as vice-president for a certain term the minister who, according to that tradition, will be selected president in the succeeding term. Also by tradition, the elections of the president and vice-president are never unanimous, there being always one isolated minority vote in each election, as the ministers who are to be elected never cast their votes for themselves; such votes are cast either for the Dean of the Court – its most senior member – or for some other elder minister that the one to be elected admires and wants to pay homage to.