The Ministry of External Relations is responsible for managing the foreign relations of Brazil. Brazil is a significant political and economic power in Latin America and a key player on the world stage.[1] Brazil's foreign policy reflects its role as a regional power and a potential world power and is designed to help protect the country's national interests, national security, ideological goals, and economic prosperity.

Between World War II and 1990, both democratic and military governments sought to expand Brazil's influence in the world by pursuing a state-led industrial policy and an independent foreign policy. Brazilian foreign policy has recently aimed to strengthen ties with other South American countries, engage in multilateral diplomacy through the United Nations and the Organization of American States, and act at times as a countervailing force to U.S. political and economic influence in Latin America.

Brazil's international relations are based on article 4 of the Federal Constitution, which establishes non-intervention, self-determination, international cooperation and the peaceful settlement of conflicts as the guiding principles of Brazil's relationship with other countries and multilateral organizations.[2] According to the Constitution, the President has ultimate authority over foreign policy, while Congress is tasked with reviewing and considering all diplomatic nominations and international treaties, as well as legislation relating to Brazilian foreign policy.[3]

The Ministry of Foreign Affairs, also known as Itamaraty, is the government department responsible for advising the President and conducting Brazil's foreign relations with other countries and international bodies. Itamaraty's scope includes political, commercial, economic, financial, cultural and consular relations, areas in which it performs the classical tasks of diplomacy: represent, inform and negotiate. Foreign policy priorities are established by the President. 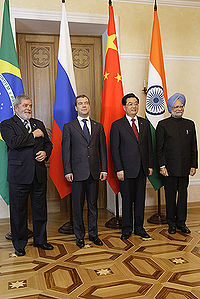 BRIC (Brazil, Russia, India and China) leaders during the 1st BRIC summit in 2009.

Brazil's foreign policy is a by-product of the country's unique position as a regional power in Latin America, a leader among developing countries, and an emerging world power.[4] Brazilian foreign policy has generally been based on the principles of multilateralism, peaceful dispute settlement, and non-intervention in the affairs of other countries.[5] Brazil engages in multilateral diplomacy through the Organization of American States and the United Nations, and has increased ties with developing countries in Africa and Asia. Brazil is currently commanding a multinational U.N. stabilization force in Haiti, the MINUSTAH. Instead of pursuing unilateral prerogatives, Brazilian foreign policy has tended to emphasize regional integration, first through the Southern Cone Common Market (Mercosul) and now the Union of South American Nations. Brazil is also committed to cooperation with other Portuguese-speaking nations[6] through joint-collaborations with the rest of the Portuguese-speaking world, in several domains which include military cooperation, financial aid, and cultural exchange. This is done in the framework of CPLP,[7] for instance. Lula da Silva's recent visit to Africa included State visits to three Portuguese-speaking African nations (Angola, São Tomé and Príncipe, and Mozambique).[8] Finally, Brazil is also strongly committed in the development and restoration of peace in East Timor, where it has a very powerful influence.[9][10]

Brazil's political, business, and military ventures are complemented by the country's trade policy. In Brazil, the Ministry of Foreign Relations continues to dominate trade policy, causing the country's commercial interests to be (at times) subsumed by a larger foreign policy goal, namely, enhancing Brazil's influence in Latin America and the world.[11] For example, while concluding meaningful trade agreements with developed countries (such as the United States and the European Union) would probably be beneficial to Brazil's long-term economic self-interest, the Brazilian government has instead prioritized its leadership role within Mercosul and expanded trade ties with countries in Africa, Asia and the Middle East.

Brazil's soft power diplomacy involves institutional strategies such as the formation of diplomatic coalitions to constrain the power of the established great powers.[12] In recent years, it has given high priority in establishing political dialogue with other strategic actors such as India, Russia, China and South Africa through participation in international groupings such as BASIC, IBSA and BRICS. The BRICS states have been amongst the most powerful drivers of incremental change in world diplomacy and they benefit most from the connected global power shifts.[12]

The Brazilian foreign policy under the Lula da Silva administration had been focused on the following directives: to contribute toward the search for greater equilibrium and attenuate unilateralism; to strengthen bilateral and multilateral relations in order to increase the country's weight in political and economic negotiations on an international level; to deepen relations so as to benefit from greater economical, financial, technological and cultural interchange; to avoid agreements that could jeopardize development in the long term.[13]

These directives implied precise emphasis on: the search for political coordination with emerging and developing countries, namely India, South Africa, Russia and China; creation of the Union of South American Nations and its derivative bodies, such as the South American Security Council; strengthening of Mercosul; projection at the Doha Round and WTO; maintenance of relations with developed countries, including the United States; undertaking and narrowing of relations with African countries; campaign for the reform of the United Nations Security Council and for a permanent seat for Brazil; and defense of social objectives allowing for a greater equilibrium between the States and populations.[13]

See also: List of presidential trips made by Dilma Rousseff

The foreign policy under the Rousseff administration has sought to deepen Brazil's regional commercial dominance and diplomacy, expand Brazil's presence in Africa, and play a major role in the G20 on climate change and in other multilateral settings.[14]

At the United Nations, Brazil continues to oppose sanctions and foreign military intervention, while seeking to garner support for a permanent seat at the Security Council.[15] Cooperation with other emerging powers remain a top priority in Brazil's global diplomatic strategy. On the recent airstrike resolution supporting military action in Libya, Brazil joined fellow BRICS in the Council and abstained. On the draft resolution condemning violence in Syria, Brazil worked with India and South Africa to try to bridge the divide between the Western powers and Russia and China.[16]

Over the past decade, Brazil has firmly established itself as a regional power.[17] It has traditionally been a leader in the inter-American community and played an important role in collective security efforts, as well as in economic cooperation in the Western Hemisphere.[18] Brazilian foreign policy supports economic and political integration efforts in order to reinforce long-standing relationships with its neighbors.[17] It is a founding member of the Organization of American States (OAS) and the Inter-American Treaty of Reciprocal Assistance (Rio Treaty).[18] It has given high priority to expanding relations with its South American neighbors and strengthening regional bodies such as the Latin American Integration Association (ALADI), the Union of South American Nations (UNASUR) and Mercosur.[18] Although integration is the primary purpose of these organizations, they also serve as forums in which Brazil can exercise its leadership and develop consensus around its positions on regional and global issues.[17] By promoting integration through organizations like Mercosur and UNASUR, Brazil has been able to solidify its role as a regional power.[17] In addition to consolidating its power within South America, Brazil has sought to expand its influence in the broader region by increasing its engagement in the Caribbean and Central America.[17]

Brazil regularly extends export credits and university scholarships to its Latin American neighbors.[19] In recent years, the Brazilian Development Bank (BNDES) has provided US$5 billion worth of loans to countries in the region.[20] Brazil has also increasingly provided Latin American nations with financial aid and technical assistance.[17] Between 2005 and 2009, Cuba, Haiti, and Honduras were the top three recipients of Brazilian assistance, receiving over $50 million annually.[17][21]

Brazil has a large global network of diplomatic missions, and maintains diplomatic relations with every United Nations member state, in addition to Palestine and the Holy See.[22] As of 2011, Brazil's diplomatic network consisted of 179 overseas posts.[23]

Brazil is currently seeking a permanent seat on the United Nations Security Council.[28] It is a member of the G4, an alliance among Brazil, Germany, India, and Japan for the purpose of supporting each other’s bids for permanent seats on the Security Council.[28] They propose the Security Council be expanded beyond the current 15 members to include 25 members. The G4 countries argue that a reform would render the body "more representative, legitimate, effective and responsive" to the realities of the international community in the 21st century.[28]

Overseas aid has become an increasingly important tool for Brazil's foreign policy.[32] Brazil provides aid to various countries in Africa and Latin America through the Brazilian Agency of Cooperation (Abbreviation: ABC; Portuguese: Agência Brasileira de Cooperação), in addition to offering scientific, economical, and technical support to programs in various countries. Estimated to be around $1 billion annually, Brazil is on par with China and India and ahead of many more traditional donor countries.[32] The aid tends to consist of technical aid and expertise, alongside a quiet non-confrontational diplomacy to development results.[32] Brazil's aid demonstrates a developing pattern of South-South aid, which has been heralded as a 'global model in waiting'.[33]