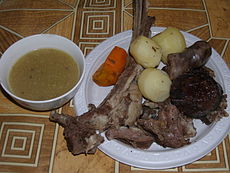 Mongolian cuisine refers to the local culinary traditions of Mongolia and Mongolian styled dishes. The extreme continental climate has affected the traditional diet, so the Mongolian cuisine primarily consists of dairy products, meat, and animal fats. Use of vegetables and spices is limited. Due to geographic proximity and deep historic ties with China and Russia, Mongolian cuisine is also influenced by Chinese and Russian cuisine.[1] 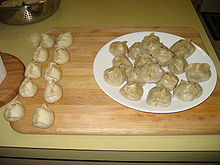 The nomads of Mongolia sustain their lives directly from the products of domesticated animals such as cattle, horses, camels, yaks, sheep, and goats, and sometimes game.[1] Meat is either cooked, used as an ingredient for soups or dumplings (buuz/khuushuur/bansh), or dried for winter (borts).[1] The Mongolian diet includes a large proportion of animal fat which is necessary for the Mongols to withstand the cold winters and their hard work. Winter temperatures as low as −40 °C/°F and outdoor work require sufficient energy reserves. Milk and cream are used to make a variety of beverages, as well as cheese and similar products.[2]

The nomads on the countryside are self-supporting by principle. Travellers will find yurts marked as "guanz" in regular intervals near the roadside, which operate as simple restaurants. In the yurt, which is a portable dwelling structure, Mongolians usually cook in a cast-iron or aluminium pot on a small stove, using wood or dried animal dung (argal) as fuel. 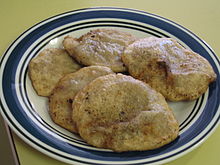 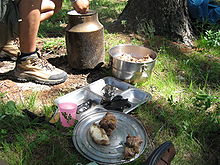 The most common rural dish is cooked mutton, often without any other ingredients. In the city, every other locale displays a sign saying "buuz". Those are dumplings filled with meat, which are cooked in steam. Other types of dumplings are boiled in water ("Bansh"), or deep fried in mutton fat ("Khuushuur"). Other dishes combine the meat with rice or fresh noodles into various stews (tsuivan, budaatai huurga) or noodle soups (guriltai shol).

The most surprising cooking method is only used on special occasions. In this case, the meat (often together with vegetables) gets cooked with the help of stones, which have been preheated in a fire. This either happens with chunks of mutton in a sealed milk can ("Khorkhog"), or within the abdominal cavity of a deboned goat or marmot ("Boodog").

Milk is boiled to separate the cream (öröm, clotted cream).[2] The remaining skimmed milk is processed into cheese ("byaslag"), dried curds (aaruul), yoghurt, kefir, as well as a light milk liquor ("Shimiin Arkhi"). The most prominent national beverage is airag, fermented mare's milk.[2] A popular cereal is barley, which is fried and malted. The resulting flour (arvain guril) is eaten as a porridge in milk fat and sugar or drunk mixed in milk tea. The everyday beverage is salted milk tea ("Süütei Tsai"), which may turn into a robust soup by adding rice, meat, or Bansh. As a consequence of the Russian influence during socialism, vodka also has gained some popularity[2] with a surprising number of local brands (usually grain spirits).

Horse meat is eaten in Mongolia and can be found in grocery stores.

For dessert, Mongolians have boortsog, a type of Mongolian biscuit or cookie.

A guest entering a yurt will always be given something to eat. It is extremely rude to reject the offer, but it isn't necessary to empty the bowl either. Taking a small bite or a sip satisfies the etiquette, and the rest may be returned without difficulty. An empty bowl will be refilled immediately. Food (as well as other items) are always passed and received with the right hand, while the left hand touches the right elbow for symbolic support. 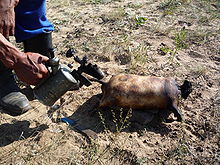 Some restaurants in East Asia, Europe, and North America offer a type of cuisine called "Mongolian barbecue." Their staff will stir fry all kinds of ingredients (typically of East Asian origin) in front of the customer on a large heated steel or stone plate. Although one such locale, BD's Mongolian Grill, has opened even in Ulaanbaatar (ironically the first American chain to open in Mongolia), neither the ingredients nor the cooking method has anything in common with Mongolian cuisine. Rather, they are inspired by the Japanese teppanyaki. Another deceptive meal is the "Mongolian Beef" sold in many Western restaurants. The narrowly sliced beef stir-fried with vegetables may have its origin in American Chinese cuisine and is unrelated to Mongolian cooking.