Taiwanese cuisine itself is often associated with influences from mid to southern provinces of Mainland China, most notably from the province of Fujian (Hokkien), but influences from all of Mainland China can easily be found. A notable Japanese influence exists due to the period when Taiwan was under Japanese rule. Traditional Chinese food can be found in Taiwan, alongside Fujian and Hakka-style as well as native Taiwanese dishes, includes dishes from Guangdong, Jiangxi, Chaoshan, Shanghai, Hunan, Sichuan and Beijing.

Pork, seafood, rice, and soy are very common ingredients. Beef is far less common, and some Taiwanese (particularly the elderly generation) still refrain from eating it. This is in part due to the considerations of some Taiwanese Buddhists, a traditional reluctance towards slaughtering precious cattle needed for agriculture, and an emotional attachment and feeling of gratefulness and thanks to the animals traditionally used for very hard labour. Curiously, the Taiwanese version of beef noodle soup remains one of the most popular dishes in Taiwan, in spite of this traditional aversion.

Taiwan's cuisine has also been influenced by its geographic location. Living on a crowded island, the Taiwanese had to look aside from the farmlands for sources of protein. As a result, seafood figures prominently in their cuisine. This seafood encompasses many different things, from large fish such as tuna and grouper, to sardines and even smaller fish such as anchovies. Crustaceans, squid, and cuttlefish are also eaten.

Because of the island's sub-tropical location, Taiwan has an abundant supply of various fruit, such as papayas, starfruit, melons, and citrus fruit. A wide variety of tropical fruits, imported and native, are also enjoyed in Taiwan. Other agricultural products in general are rice, corn, tea, pork, poultry, beef, fish, and other fruits and vegetables. Fresh ingredients in Taiwan are readily available from markets.

An important part of Taiwanese cuisine are xiaochi,[1] substantial snacks along the lines of Spanish tapas or Levantine meze. 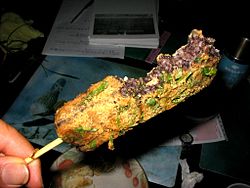 Vegetarian restaurants are commonplace with a wide variety of dishes, mainly due to the influence of Buddhism.

There is a type of outdoor barbecue called khòng-iô (焢窯, hōngyáo). To barbecue in this manner, one first builds a hollow pyramid up with dirt clods. Next, charcoal or wood is burnt inside until the temperature inside the pyramid is very high (the dirt clods should be glowing red). The ingredients to be cooked, such as taro, yam, or chicken, are placed in cans, and the cans are placed inside the pyramid. Finally, the pyramid is toppled over the food until cooked.

Many non-dessert dishes are usually considered snacks, not entrees; that is, they have a similar status to Cantonese dim sum or Spanish tapas. Such dishes are usually only slightly salted, with lots of vegetables along with the main meat or seafood item.

There is the Moon Cake which has a thick filling usually made from lotus seed paste or sweetened red bean paste and surrounded by a relatively thin (2–3 mm) crust and may contain yolks from salted duck eggs. It is traditionnaly eaten during the festival is for Lunar worship and Moon watching. Mooncakes are offered between friends or on family gatherings while celebrating the festival. The Mid-Autumn Festival is one of the four most important Chinese festivals.

There are other cakes that can mix salty ingredients with sweet ones to create a balance while enjoying these delicacies with tea. The crust could be shiny from applying a layer of egg yolk before putting in the oven, or not in that case it is often whiter and the crust has more layers. 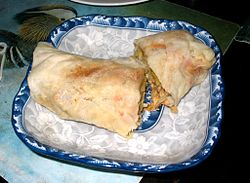 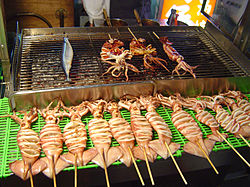 Surrounded by ocean on all sides, seafood has been an important staple in the Taiwanese diet. Here is grilled squid sold at a night market vendor.

Taiwan's best-known snacks are present in the night markets, where street vendors sell a variety of different foods, from finger foods, drinks, sweets, to sit-down dishes. In these markets, one can also find fried and steamed meat-filled buns, oyster-filled omelets, refreshing fruit ices, and much more. Aside from snacks, appetizers, entrees, and desserts, night markets also have vendors selling clothes, accessories, and offer all kinds of entertainment and products.

Stinky to-fu is a popular local food in Taiwan and many other Chinese regions such as Hong Kong and Shanghai. The reason of why it is called as “Stinky to-fu” is because of its strong unpleasant odour. Back in the Qing dynasty, Stinky to-fu was already a dish in the royal family’s meal. Besides, it is also one of the favourite food of the Empress CiXi (慈禧太后). Stinky to-fu can generally be classified into two main kinds, which are soft stinky to-fu(臭豆腐乳) and dried stinky to-fu (臭豆腐乾).

According to the folk stories, stinky to-fu was invented by a person who named Wong Zi Wo (王致和)in the Qing dynasty . However the versions of the exact story are quite varied.

Because of failing the imperial examination, Wong Zi Wo stayed in Beijing and relied on selling to-fu to make a living. One day, because of the huge quantity of redundant to-fu, he tried to cut the to-fu into small cubes and put them into an earthen jar. After several days, he opened up the jar and found out that the to-fu had turned into greenish and become extremely smelly. He tasted the “stinky greenish to-fu” and it was surprisingly delicious. And so he decided to sell those “stinky greenish to-fu” as a commodity in his shore.

During the KangXi period, Wong Zi Wo was a to-fu seller as well as a pig feeder. One day, he was making dried to-fu with an earthen jar. After he putted all the seasonings into the jar, he was districted by the pigs and forgot to close the lid, and so the white paint on the wall kept falling into the jar. A while ago, after Wong Zi Wo had settled down all the pigs, the dried to-fu had already turned into the dried stinky to-fu.

Soft Stinky to-fu commonly used as a condiment for rice, bread, congee or noodle. It can also be used as a seasoning for cooking.

Other cultures of eating stinky to-fu:

The ways of eating stinky to-fu in different provinces of Mainland China are actually quite varied.

In Anhwei, the deliciousness of stinky to-fu mainly depends on its spiciness. The spicier it is, the more it suits the local favour. [3]

Wong Zi Wo Stinky to-fu shop is a China time-honored brand in Beijing which famous for its soft stinky to-fu.