Caroline Patricia Lucas (born 9 December 1960) is a British politician. Lucas is the leader of the Green Party of England and Wales, and the Green Party's first and only Member of Parliament (MP) in the House of Commons of the United Kingdom. She was elected for the Brighton Pavilion constituency at the 2010 general election.[1][2]

Lucas was formerly a Member of the European Parliament for the South East England region. Along with Jean Lambert she was one of two Green MEPs from the UK, a post she held from 1999 to 2010. As a result of the restrictions regarding dual mandates, she had to give up her seat in European Parliament to take up her seat in the House of Commons. Keith Taylor succeeded her in this position.[3]

She is noted for campaigning and writing on green economics, localisation, alternatives to globalisation, trade justice, animal welfare and food. In her time as a politician and activist, she has worked with numerous NGOs and think-tanks, including the Royal Society for the Prevention of Cruelty to Animals (RSPCA), Oxfam and the Campaign for Nuclear Disarmament.

Lucas was born in Malvern in Worcestershire, to middle class and Conservative-voting parents.[4] Her father ran a small central heating company.[5]

Lucas was educated at Malvern Girls' College (which became Malvern St James in 2006), an independent school in Great Malvern. She then went to the University of Exeter, where she gained a first-class BA (Hons) in English Literature, which she completed in 1983.[6][7] While there, she went on many trips to Greenham Common and Molesworth when involved with CND. She took a scholarship at the University of Kansas between 1983 and 1984 before doing a Diploma of Journalism in 1987. She earned her PhD from the University of Exeter in 1989 with a thesis entitled Writing for Women: a study of woman as reader in Elizabethan romance.[8]

Lucas began her career as an activist in the anti-nuclear movement with the Campaign for Nuclear Disarmament (CND). She was heavily involved in the Snowball Campaign against US military bases in the UK.[9]

Lucas was first elected as a Member of the European Parliament for the South East England Region at the 1999 elections, the first year the election was by proportional representation. In that year the Green Party gained 7.4% of the vote (110,571 votes). She was re-elected in 2004, gaining 173,351 votes (7.9% share), and again in the 2009 election when the party's vote under the list system rose to 271,506, or 11.6%.[10] In the European Parliament, she is or has been a member of the Committee for Trade, Industry, Energy and Research; the Committee on the Environment, Public Health and Consumer Policy;[9] the Committee on International Trade; and the Temporary Committee on Climate Change.[8] In addition, she is or has been Vice-President of the Animal Welfare Intergroup, a member of Intergroups on Peace Issues and Consumer Affairs, a member of the Parliament's Delegation to ACP (African Caribbean, and Pacific) Countries,[9] and a member of the Delegation for Relations with the Palestinian Legislative Council.[8] As part of her committee work, she was the Parliament's Rapporteur (draftsperson) on a Commission Communication on the impact of air transport on the environment, and the Vice-President of the parliament's committee of inquiry into foot and mouth disease.[9]

Brighton Pavilion had seen the highest vote to date for a Green Party candidate when Keith Taylor, a former Green Party Principal Speaker, won 22% of the vote in the 2005 general election. In 2007, Lucas declared her intention to stand for the Green Party's nomination for the prospective parliamentary candidate in the Brighton Pavilion constituency for the next general election. In a letter to party members, Lucas made it clear that she would only stand if she won the internal party selection election by more than 10%, to avoid internal division. She described the move as "the most difficult decision of my life", due to "personal and family commitments" but also her "loyalty and commitment to Keith Taylor, who is a person and a politician for whom I have great admiration and respect".[11] On 18 July 2007, it was announced that Lucas had been selected by the Brighton Green Party. Lucas won with 55% of the party ballot against Keith Taylor's 45%.[2] Lucas was elected as the Green Party's first-ever MP in the general election of 2010. However, she is not the first Green Candidate to be elected under a first-past-the-post electoral system, as this was Jeanette Fitzsimons of the Green Party of Aotearoa New Zealand in the Coromandel Electorate in 1999. 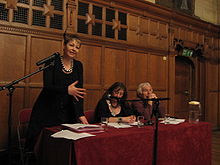 Caroline Lucas speaking about the Green New Deal in Oxford, in 2009

In July 2008, Lucas joined the Green New Deal Group, an alliance of experts in finance, energy and the environment. The group put forward plans to invest in green energy, provide greater regulation of the finance sector, and strengthen ties between environmentalists, industry, agriculture, and trade unions. The proposals were put forth in response to fears over the recession, climate change, and increasing energy prices, and stressed the need for integrative policies towards tackling all three.[12]

In July 2010, Lucas expressed her support for seven acquitted campaigners of the Smash EDO campaign who caused £180,000 damage to an EDO MGM arms factory under the lawful excuse defence because the company manufactured and sold certain components used by the Israeli military. Lucas stated that: "I am absolutely delighted the jury has recognised that the actions of the decommissioners were a legitimate response to the atrocities being committed in Gaza. I do not advocate non-violent direct action lightly ... [but] their actions were driven by the responsibility to prevent further suffering in Gaza." [13]

She is a supporter of homeopathy, having signed an early day motion in support of its continued funding on the National Health Service sponsored by Conservative MP David Tredinnick.[14]

As well as her party political activities, Lucas has worked extensively with developmental NGO Oxfam as Press Officer (1989–91), Asia Desk Communications Officer (1991–94), Policy Adviser on Trade and the Environment (1994–97) and Team Leader for Trade and Investment (1998–99).

Lucas was a candidate in the Green Party of England and Wales leadership election, 2008. On 5 September she was elected as the party's first ever leader. Lucas won 92.4% of the vote (standing against one other candidate, Ashley Gunstock), with a turnout of 37.9%.

Currently, she is vice-president of the Royal Society for the Prevention of Cruelty to Animals (RSPCA)[15] and the Stop the War Coalition[16] and has been on the National Council of CND since 2004.[17] She has been an Advisory Board Member to the International Forum on Globalisation, the Centre for a Social Europe[8] and the Protect the Local, Globally think-tank.[3] She has been a Trustee of the Radiation Research Trust and Patron of the Joliba Trust (Africa). She is Matron of the Women's Environmental Network. Between 1997 and 1998, she was called upon as a Policy Adviser on Trade and Investment for the UK government's Department for International Development.[8]

Caroline Lucas speaking as the first Leader of the Green Party of England and Wales at its autumn conference in 2008.

In her time as a politician and activist, Lucas has won the 2006 Michael Kay Award "for her outstanding contribution to European animal welfare" from the RSPCA.[19] She was named in the Top 10 of the New Statesman Magazine Person of the Year Award 2006, which was voted for by New Statesman readers, alongside varied personalities including Venezuelan President Hugo Chávez and Shami Chakrabarti, Director of the civil liberties NGO Liberty. This was considered surprising because many of the other members of the Top 10, including 2006 Nobel Peace Prize winner Muhammad Yunus, had been nominated and profiled by prominent writers in the magazine in the weeks before the vote.[20]

Lucas has won the award for Politician of the Year in The Observer Newspaper Ethical Awards three times. The award is voted for by Observer readers, who chose her to win in 2007, 2009 and 2010. In 2007 she had been shortlisted alongside Gordon Brown and David Cameron.[21][22][23] In 2008 she was listed by The Guardian as one of "50 people who could save the planet".[24]

In July 2007, Lucas came in eighth place in the New Consumer Magazine Top 100 Ethical Heroes list, behind a number of celebrities including fashion designer Katharine Hamnett (who came 1st), Anita Roddick (The Body Shop founder), Al Gore (former US Vice-President who is now a campaigner for action on climate change) and Jonathon Porritt, a former Green Party politician. The list was designed to recognise people who "made the biggest contribution to ethical consumption over the last five years". According to New Consumer magazine, "if you had to trust one person with changing the world you could do worse than rely on Lucas".[25] During the same month, BBC Wildlife magazine named her in their Top 50 Conservationists, which was topped by Prince Charles.[26]

Lucas has become a prolific writer of reports, articles and books on the subjects of trade justice, localisation, globalisation, animal welfare and food, in which she is critical of free trade, a Single European Currency, trade-led developmental policies, genetically-modified (GM) food and a lack of attention to environmental and social issues.[3] Her most notable work is Green Alternatives to Globalisation: A Manifesto (co-authored with Mike Woodin), which advocates localisation of economies based on minimal trade and greater social and environmental concern, in opposition to neo-liberal, market-led forces of globalisation.[32] 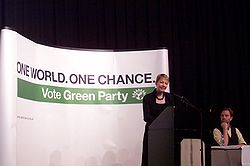 Caroline Lucas keynote speech at the autumn conference of the Green Party of England and Wales with Councillor Rupert Read looking on, Hove, 2006-09-23

She married Richard Savage in July 1991 in Oxford. They have two sons. She had a house at Stonesfield, between Charlbury and Woodstock, for five years. [33]