Interstate 87 begins at an intersection with the Bruckner Expressway (I-278) at the Robert F. Kennedy Bridge. For the next 8.4 miles (13.5 km), Interstate 87 is named the Major William Francis Deegan Expressway as it travels through The Bronx. The first exit along the Major Deegan northbound is for Willis Avenue and the nearby Third Avenue Bridge. There is an exit before this going southbound, for Brook Avenue. At 1.20 miles (1.93 km), Grand Concourse interchanges at Exit 3. East 149th Street is the next exit, which heads into the heart of The Bronx. Exit 5, which is signed for East 161st Street, actually lets off at Jerome Avenue, near Yankee Stadium. Exit 6 is only accessible via Exit 5 (going northbound) and is for East 153rd Street. Exit 7 is for the Cross Bronx Expressway and Trans-Manhattan Expressway, both of which are signed as I - 95 and U.S. Highway 1. Exit 8 is for West 179th Street, which becomes Burnside Avenue soon thereafter. Exit 9 runs parallel with Major Deegan for ending at West Fordham Road. 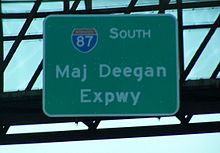 Signage for the Major Deegan Expressway

U.S. Route 9 now runs parallel with Major Deegan, which is accessible via Exit 10 for West 230th Street. Interstate 87 next enters Van Cortlandt Park and has an interchange with Van Cortlandt Park South at Exit 11. Exit 12 is for the Henry Hudson Parkway and Saw Mill River Parkway, both of which are accessible by the Mosholu Parkway. Exit 13 is for East 233rd Street and Jerome Avenue. Exit 14 is at the northern end of Van Cortlandt Park, is for McLean Ave. The Major Deegan Expressway crosses into Westchester County at Yonkers and becomes the New York State Thruway, a 496-mile (798 km), state-wide toll highway.

The section of highway between the New York City line and the junction with Interstate 90 at Albany is part of the New York State Thruway. Interstate 87 enters Westchester at Yonkers. The first exit going northbound is for Hall Place, while going southbound it is for Hall Place and McLean Avenue. (McLean Avenue is Exit 14 going northbound on the Major Deegan. There is no southbound Exit 14.) The Yonkers Avenue interchange is at 9.80 miles (15.77 km). Present just off Exit 2 is Yonkers Raceway. Exit 3 is for Mile Square Road, which interchanges just before the Cross County Shopping Center. Exit 4 is for the Cross County Parkway, which interchanges just after the shopping center. Exit 5 follows a frontage road, which heads for New York State Route 100 and the Sprain Brook Parkway. Soon after, Tuckahoe Road interchanges just before leaving Yonkers. Exit 6A is for Stew Leonard Drive, which is just a road for Sprain Ridge Park.

As Interstate 87 heads northward, New York State Route 9A begins to run parallel with it, having an interchange at Exit 7. The Saw Mill River Parkway also runs parallel, intersecting at Exit 7A. Before Exit 8, the Ardsley Service Area is accessible northbound. Exit 8 is for Interstate 287, beginning a concurrency for the next 19 miles (31 km). The exit is also the access for the Cross-Westchester Expressway. Exit 9 is the final exit before the Tappan Zee Bridge. The exit is for New York State Route 119 and the nearby U.S. Highway 9. All trucks with Class A and Class B explosives must leave at Exit 9. Interstates 287 and 87 cross the Tappan Zee and enter Rockland County.

Interstate 87 begins a 25-mile (40 km) stretch in Rockland County. Exit 10 is the first exit after the Tappan Zee and is for U.S. Route 9W in Nyack. Exit 11 is in downtown Nyack, for Highway 9W going northbound and New York State Route 59 going southbound. 87 then passes the Mountainview Nature County Park as it reaches Exit 12, which is located in the outskirts of Nyack. Exit 12 is a folded-diamond interchange for New York State Route 303 and the Palisades Center Mall. The first highway in 9.63 miles (15.50 km) interchanges at Exit 13, the Palisades Interstate Parkway.

The road has three current spur routes: Interstate 287 connects with its parent in a 19-mile (31 km) long concurrency near the southern end of the highway, with I - 87 signed as north - south, and I - 287 signed as east – west. This is a bypass around New York City. West of the concurrency at Exit 15, it loops around New York to meet the New Jersey Turnpike in Middlesex County, New Jersey. East of the concurrency, I - 287 continues as the Cross Westchester Expressway to end at Interstate 95 (the New England Thruway) in Rye, New York, near the Connecticut border. Note that I - 287 leaves New York state, while its parent does not, making I - 287 one of only a few three-digit Interstate Highways that goes through more states than does its parent. Moving north, Interstate 587 is less than two miles (3.2 km) long. It is unusual in that it has no interchanges along its length, and its eastern terminus is at a traffic light, while its western terminus is at a roundabout (where it connects with Interstate 87). Because there is no direct exit from I - 87 into Albany, the 15-kilometer-long Interstate 787 carries traffic to and from the Thruway and the capital city. 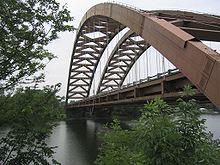 The Thaddeus Kosciusko Bridge carries I-87 over the Mohawk River.

North of Albany, Interstate 87 is named the Adirondack Northway (or simply the "Northway"), and it continues all the way to the Canadian–American border at Champlain, New York. I - 87 joins the Northway at Exit 1. However, the Northway begins 0.86 miles (1.38 km) south of the interchange with I - 87 and I -90 at U.S. Highway 20 in Guilderland, NY. This short expressway spur, known locally as Fuller Road Alternate,[2] is designated as NY 910F, an unsigned reference route, by the New York State Department of Transportation.[2]

There is no Exit 3, since this number was reserved for an interchange with Interstate 687, which has never been built. Planning is underway to relieve congestion at Exit 4 and provide better access to the Albany International Airport. Several of the proposed alternatives add a new Exit 3.

Between Exits 2 and 5, I - 87 runs parallel to Wolf Road, a business thoroughfare through the town of Colonie. The northbound exit ramp 2E ends at the intersection of New York Route 5 (Central Avenue) and Wolf Road. Wolf Road is east of the expressway to Exit 4 (County Route 151, Albany Shaker Road) southeast of the Albany International Airport. The remainder of Wolf Road runs along the west side of I - 87 from Albany Shaker Road to Watervliet Shaker Road a short distance to the west of Exit 5. Wolf Road serves as a main access point for Colonie Center, one of the Capital District's largest enclosed shopping malls, from I - 87.

The southern portion of the Northway through Colonie and Saratoga County is now a heavily-traveled commuter route. Since the highway's construction, Saratoga County has become the fastest growing area of the Capital District, and indeed all of upstate New York.[3]

In Lake George, I - 87 connects with U.S. Highway 9 and New York State Route 9N at Exit 22 by way of a short two-lane highway known infrequently as the Lake George Connector. It is here where the first signs of Quebec Autoroute 15 are posted as motorists head north towards Canada. From here the Northway becomes four lanes all the way to the Canadian border[citation needed] (with the highway, both north and south slightly becoming six lanes once again just before the customs).[citation needed]

At milepost 100 on southbound I - 87, there is a United States Customs border patrol station. This was added after the 2001 terrorist attacks.

In Clinton County, exit signs from Exit 34 to 43 are bilingual in English and French because of its proximity to Quebec. Also, signs for Quebec Autoroute 15 are posted on I - 87 North as the Northway approaches the Canadian border.

The designation Interstate 87 was assigned on August 14, 1957, as part of the establishment of the Interstate Highway System.[1] The highway initially utilized the pre-existing New York State Thruway from Albany to Newburgh and in lower Westchester County, and the Major Deegan Expressway in New York City. From Newburgh to the Elmsford area, I - 87 was to follow a new highway running parallel to U.S. Highway 9 northward along the eastern bank of the Hudson River to Fishkill. I - 87 would then have followed the proposed I - 84 across the Hudson to rejoin the Thruway outside of Newburgh. Meanwhile, all of the Adirondack Northway, the portion of I - 87 slated to extend from Albany north to the Canadian–American border, had yet to be built.[4][5]

By 1966, the Northway was completed from Albany north to Lake George and from the Canadian border south to Keeseville. At the time, I - 87 curved around the outskirts of Lake George to end at N.Y. 9N north of the village[10] on a highway built ca. 1964.[11] The last section of the Northway to be built—a 30-mile (48 km) stretch between Underwood (exit 30) and Keeseville (exit 34)—was completed in spring 1968.[citation needed] I - 87 was reconfigured slightly near Lake George as a result: instead of heading east to N.Y. 9N, it continued north on a parallel routing to U.S. 9.[12] I - 87's former routing to N.Y. 9N, known infrequently today as the Lake George Connector, is now N.Y. 912Q, an unsigned reference route 0.66 miles (1.06 km) in length. N.Y. 912Q has one intermediate interchange with U.S. 9.[2] The completion of I - 87 linked New York City with Montreal by way of a direct, limited-access highway (with I - 87 becoming Autoroute 15 at the Canadian border).[citation needed]

A long stretch of the Northway through the Adirondack Park had been an unserved zone for cellular telephone service. In 2007, a driver crashed off the road was unable to summon help, prompting messages from local governments to telephone companies to add new wireless towers to address the problem, and also for warning signs to inform travelers of the so-called "dark zone".[13] Throughout this area, roadside emergency call boxes are located approximately every two miles on both sides of the roadway. These boxes use a two-way UHF radio network to connect directly to New York State Police dispatchers. The first of 13 new cellular phone towers along I - 87 was installed in October 2008. A second cellular phone tower was completed just one month later.[14]

Fuller Road Alternate, the lone portion of the Adirondack Northway not part of I - 87, was originally intended to be part of the Southern Albany Expressway, a proposed highway which would have connected the Northway with Interstate 787 and run parallel to the New York State Thruway between Exits 23 and 24.[15]

By 1962, the plan to build I - 87 along the proposed Hudson River Expressway had been scrapped. Instead, I - 87 was then proposed to begin in Port Chester and follow a new routing through Purchase, Armonk, and Katonah to Brewster, where it would join I - 84.[16] The routing was modified slightly by 1968: I - 87 still began in New York City, then overlapped with Interstate 287 east to Purchase. From there, I - 87 headed north along the now-open expressway to Armonk, where it ended at New York State Route 22. Another portion of the highway, from Goldens Bridge (New York State Route 138) to Brewster, was open as well while the part from Armonk to Katonah was under construction.[12] This segment, as well as the part from Katonah to Goldens Bridge, was completed by 1971.[17]

On January 1, 1970, I - 87 was rerouted between Elmsford and Newburgh to follow the mainline of the Thruway instead. The former routing of I - 87 between Purchase and Brewster was then redesignated as Interstate 684.[18]

Exit 6 on the Adirondack Northway was originally a diamond interchange.[19] Construction to convert the junction into a single-point urban interchange began in mid-2008[20] and was completed on September 12, 2010.[21] The total cost of the project was $41.9 million.[20]

A project is in the early stages of design to improve access to the Albany International Airport, either by constructing a new Exit 3, or by reconfiguring Exit 4. As of January 2010, the project is expected to be completed in late 2015.[22]

This exit list includes the segment of the Northway designated as NY 910F. Note that mile markers begin from where I - 87 leaves the Thruway, and not the mileage from the highway's beginning in New York City.