For the town in Bulgaria see Novi Pazar, Bulgaria.

Novi Pazar (Serbian Cyrillic: Нови Пазар, pronounced [nɔ̂v̞iː pǎzaːr]) is a city and municipality located in southwest Serbia, in the Raška District. According to the official census in 2011, number of inhabitants of municipality is 92,776, while the city itself has a population of 60,638. Novi Pazar is the center of Serbian part of Sandžak region, and the cultural center of Bosniaks in Serbia. 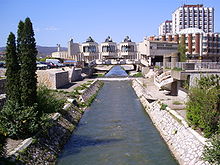 Novi Pazar is the main economic and cultural centre of the Sandžak region (followed by Bijelo Polje in Montenegro). It is located in the valleys of the Jošanica, Raška (river), Deževska, and Ljudska rivers at the elevation of 496m. The city is surrounded by Golija and Rogozna mountains, as well as the Pešter plateau. The total area of the municipality is 742 km². It contains over 100 settlements, mostly small and spread over hills and mountains surrounding the city. After the city, the largest village is Mur, with over 3000 residents. 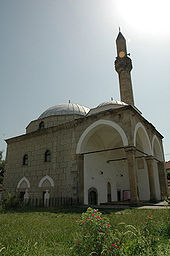 A 5th century BCE princely grave (with regalia, gold-silver jewelry, beads, Attic pottery) of Greco-Illyrian type was excavated beneath the floor of the oldest church of Serbia, Petrova church.[3][4]

The town probably began life as an informal trading enclave which had spilled out from the nearby medieval capital of the Serbian Kingdom, Ras (now Stari Ras). Ras was less ideally placed for catching onto the passing trade from the trade routes and major roads through the Balkans, and the establishment of a trading community a few miles away at Novi Pazar would have improved matters (and hence the name of the city).

Novi Pazar was formally founded as a city in its own right in 1459-61 by Isa-beg Ishaković, who was also the founder of the city of Sarajevo. The first written document which mention Novi Pazar dates back to the 15th century, and describes the decision of Ragusan Council to appoint a consul in this town. That reinforces the idea that the town was already developed back then, thanks to its outstanding geographic position, as it was at the intersection of important roads leading to Dubrovnik, Niš, Sofia, Constantinople, Salonica (Thessaloniki), Sarajevo, Belgrade, and Budapest. Many authors wrote about Novi Pazar and Evliya Celebi noted that it was one of the biggest towns in the Balkans in the 17th century.

The city was the capital of the Ottoman Sanjak of Novi Pazar that existed between the 15th and the 20th century. The father of the famous Ragusan (Dubrovnik) scientist Ruđer Bošković from the 18th and 19th centuries, migrated from Dubrovnik and came to Novi Pazar, where he spent the last years of his life.

The name Novi Pazar (then Novibazar) entered the world encyclopedias as a synonym for the Sandžak region in 1878, the year when the Congress of Berlin designated the entire region as "corpus separatum" named Sanjak of Novi Pazar. The Sanjak of Novi Pazar was occupied and administered by Austria-Hungary from 1878 to 1908. In 1908 it was returned to the Ottoman Empire, which ruled this territory until it was lost to Serbia in 1912 during the First Balkan War. After World War I, the town of Novi Pazar rapidly lost its importance.

According to the 1953 census data, the population of the Novi Pazar municipality numbered 53,331 people, and it was composed of:

Most of those labeled as Turks and Yugoslavs were Bosniaks. On the following several censuses, the term "Muslim by nationality" was offered by the authorities; option for Bosniak as an ethnicity appeared only in the 2002 census.

According to the data of Red Cross and NGOs, the city hosts about 6,000 Serb refugees from Kosovo, Bosnia, and Croatia.[citation needed]

After the last Serbian local election held in May 2008, local assembly seats are distributed as following:[5]

Mayor of the city is Meho Mahmutović from Sandžak Democratic Party.[6]

Lying on crossroads between numerous old and new states, Novi Pazar has always been a strong trade center. Along with the trade, the city developed manufacturing tradition. During the 20th century, it became a center of textile industry.

Paradoxically, during the turbulent 1990s and, Novi Pazar prospered, even during the UN sanctions, boosted by the strong private initiative in textile industry. Jeans of Novi Pazar, first of forged trademarks, and later on its own labels, became famous throughout the region. However, during the relative economic prosperity in Serbia of 2000s, the Novi Pazar economy collapsed, with demise of large textile combines in mismanaged privatization, and incoming competition from the import. 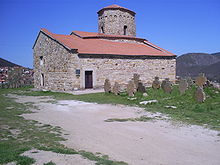 Church of St. Peter from the 9th century 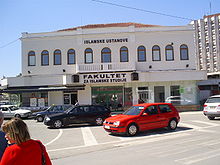 The old Serb Orthodox monastery of Sopoćani, the foundation of St. King Uroš I, built in the second half of the 13th century and located west of Novi Pazar, is a World Heritage Site since 1979 accompanying with Stari Ras (Old Ras), a medieval capital of the Serbian great župan Stefan Nemanja.

The city also houses an old church from the 9th century Church of St. Peter.[7] On a hilltop overlooking Novi Pazar is the 12th century monastery of Đurđevi stupovi, long left in ruin, but recently restored and with a monastic community using it, with plate glass to keep out the weather and preserve the fine frescos. The main mosque of the city, the Altun-Alem mosque, is the largest in this region of the Balkans and dates from 16th century. There are various other historic Ottoman buildings, such as the 17th century Amir-agin Han, a 15th century Hammam, and the 15th century Turkish fortress (all gone but the walls, the site of which is now a walled park in the city centre).

The city's football club FK Novi Pazar was founded in 1928, under the name "FK Sandžak", which later changed to "FK Deževa". The club has played under its current name since 1962, when Deževa and another local football club, FK Ras, unified under this name. The club was a SFRJ amateur champion, and a member of the Yugoslav Second League. FK Novi Pazar qualified for a promotional play-off twice, but lost both times (to FK Sutjeska Nikšić in 1994, and to FK Sloboda Užice in 1995). FK Novi Pazar is the oldest second-league team in Serbia. Football is still extremely popular sport in Novi Pazar and city stadium is always full (third most popular football club in Serbia after Red Star and Partizan). The President of FK Novi Pazar is Rasim Ljajic, a minister in the government of the Republic of Serbia.

Handball club is in second league and use to have name "Ras" but it was changed in RK Novi Pazar in 2004.