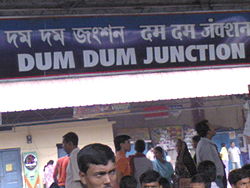 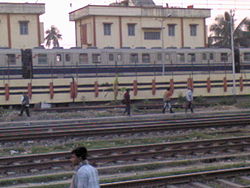 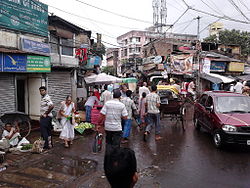 Dum Dum (Bengali দমদম Dômdôm, Hindi दमदम Damdam) is a city and a municipality in North 24 Parganas district in the state of West Bengal, India. It is a neighbourhood in North-west Kolkata and the location of Netaji Subhash Chandra Bose International Airport, formerly Dum Dum Airport. Dum Dum is a well known place in greater Kolkata. Dum Dum provides a number of transport facilities in the city. It has developed into a modern commercial centre in the outskirts of Kolkata. Dum Dum region is important as it constitutes main entry points of the city. With its domestic and international airport, it is the landing base for visitors to the city. The township falls in the northern region of Kolkata city. Dum Dum region is about 10 km from the city centre which is taken to be Esplanade, Kolkata. The nearby localities include Nager Bazar, Motijheel, Ghughu Danga, Jawpur, Rajbari and Lal Bagan.

During the 19th century the area was home to a British Royal Artillery armoury, where, in the early 1890s, Captain Bertie Clay developed a bullet with the jacket cut away at the tip to reveal its soft lead core (see hollow point bullet), known as a dum-dum,[2][3][4][5][6][7][8] or more correctly expanding bullet.

By Metro : The Kolkata Metro terminates at Dum Dum Station. This is right on the boundary of Dum Dum. From the station the Dum Dum Road leads to areas within Dum Dum and further.

The Netaji Subhash Chandra Bose International Airport or Kolkata Airport is located on the peripheries of Dum Dum and therefore, it is also called the Dum Dum Airport. There are flights to all major cities in India. There are also international flights to London, Frankfurt, Dubai, Singapore, Bangkok, Muscat, Doha, Kuala Lumpur, Kunming, Kathmandu, Dhaka and Paro.

The Eastern Railway line has a station in Dum Dum. The Railway station and the Metro station is in the same complex. The Circular Railway also terminates at the same station. The other stations in Dum Dum are Dum Dum Cantonment and Patipukur (on the Circular Railway line) and Airport Gate No 1 and Airport (on the single Airport line). Travel to airport by rail is however inconvenient as there are only a few trains at odd hours.

Autos are plenty - they can be used for short stretches.Auto can be used to travel from (i)Dum Dum st. to Nager Bazar ,(ii)Dum Dum st. to Chiria more. In addition, there are Taxis; Nagerbazar and Airport being the largest taxi stands. The other taxi stands are in Birati, Central Jail, Laketown, Bangur, Kalindi. Unfortunately the Dum Dum Station area doesn't have too many taxis as the area is extremely crowded. The other popular means of travel over short distances is the rickshaw. Many historically important places in the locality are worthy of mention, which include:

There are 4 govt. general colleges in Dum Dum, they are 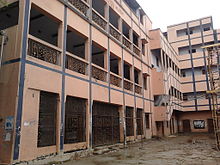 There are many Govt. Sponsored School, including:

and more. Many Private Schools are also found in the localities, including: