Interstate 795 (I-795), also known as the Northwest Expressway, is a nine-mile (14 km) freeway linking Baltimore's northwestern suburbs of Pikesville, Owings Mills and Reisterstown, Maryland to the Baltimore Beltway (Interstate 695). The route bypasses Maryland Route 140 (MD 140), Reisterstown Road), carrying part of the Baltimore Metro Subway in its median for a four-mile stretch, and provides direct access to Owings Mills Mall. It never connects to its parent, I-95, except via I-695. 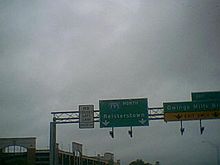 Signage for the Reisterstown exit.

I-795 begins at a directional-Y interchange at I-695 exit 19, located just west of the Metro Subway's Old Court station in Pikesville. The two carriageways, each carrying three lanes of traffic and surfaced in concrete, straddle the Metro Subway. For the next four miles, there are neither exit on I-795 nor station on the Metro Subway as they pass through a largely wooded area, paralleling a stream and crossing a railroad alignment twice. The route also passes the south side of the Woodholme Country Club. At the fourth mile is the exit for Owings Mills Boulevard, which also features direct access to Owings Mills Mall from both sides and the Owings Mills Station park and ride from the southbound carriageway. Here, the Metro Subway ends; the roadway continues north from the Owings Mills exit carrying two asphalt-surfaced lanes in each direction. The route interchanges with Franklin Boulevard and passes by the Baltimore Hebrew Cemetery before it comes to its end in Reisterstown, merging into MD 140 (Westminster Pike), which is the route that the freeway succeeded.

The Northwest Expressway was one of the first freeways planned for construction in the state of Maryland. The first four-mile (6 km) section to the Owings Mills exit was completed in 1985; the remaining five miles (8 km) were completed in 1987.

The original plan was for the highway to run into the City of Baltimore along a similar route to that of the Metro Subway. Plans to extend the highway beyond its current configuration have not been sought out by highway officials in Maryland. This alignment would most likely have terminated at Wabash Avenue, which parallels the elevated section of the Metro Subway.

The entire route is located within Baltimore County.