This is a list of extreme points of Earth, the points that are farther north, south, east or west than, higher or lower in altitude than, or farthest inland or out to sea from, any other locations on the landmasses, continents or countries.

1A 1995 realignment of the International Date Line ([4]) moved all of Kiribati to the Asian side of the Date Line, causing Caroline Island to be the easternmost. However, if the previous Date Line were followed, the easternmost point would be Tafahi Niuatoputapu, in the Tonga Islands chain. 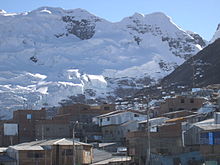 Other continents' poles of inaccessibility are as follows:

Since the Earth is a spheroid, its center (the core) is thousands of kilometres beneath its crust. On the surface, the point 0°, 0°, located in the Atlantic Ocean approximately 614 km south of Accra, Ghana, in the Gulf of Guinea, at the intersection of the Equator and Prime Meridian, at the coordinates of zero degrees by zero, is the "center" of the standard geographic model, as viewed on a map—but this selection of longitude meridian is culturally and historically dependent. The center of population, the place to which there is the shortest average route for everyone in the world, could be considered a centre of the world, and is located in the north of the Indian subcontinent, although the precise location has never been calculated.

Along any great circle